By the time this photograph was taken, Dobell had won the Archibald Prize, Australia’s leading portraiture award, twice. And he would win it again in 1959. 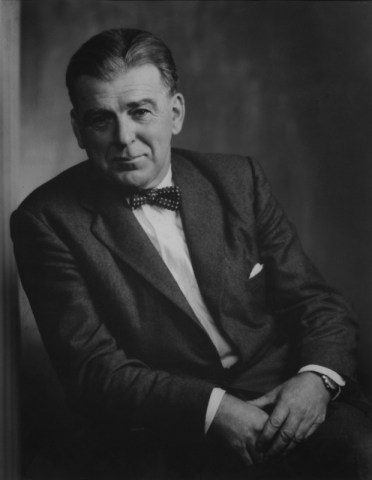 Dobell was never one for pomp and ceremony. The seventh child of a Newcastle bricklayer, he was from humble circumstances. His first job at the age of 14 was washing windows on Newcastle’s main thoroughfare, Hunter Street.

He was soon working as a draughtsman by day and attending art classes by night, before moving to Sydney in 1924. From here he eventually won a scholarship which took him to London where he lived and worked, in dispersed with trips to the Continent to study the great masters. Fellow artist James Gleeson would write of Dobell’s emerging talent, “He sees the ordinary and paints it as though it was extraordinary; he sees the commonplace and paints it as though it was unique; he sees the ugly and paints it as thought it was beautiful.” This, Gleeson said, was a characteristic shared with Rembrandt. Indeed, Europe was the making of Dobell, although for much of the time he was close to broke and supplemented his income with whatever work he could find, including as a film extra.

Back in Australia, he won his first Archibald in 1943 with a portrait of fellow artist Joshua Smith, only to unleash a storm of controversy when the painting was labeled more a caricature than a portrait. Two disgruntled losing artists went to the NSW Supreme Court to have the prize overturned, but the case was eventually thrown out, although the controversy took a toll on Dobell who did not paint for a year.

Indeed, throughout the later half of his career, Dobell split the critics. Some claimed his best work, which they said came from a limited base, was behind him while others said he retained a unique ability to capture the spirit of whoever he was painting. Despite the controversy about his work he was knighted in 1966, one of the highest of possible accolades he could have received.

In 1945 he settled into what had been his family’s holiday home on Lake Macquarie, where he returned to painting full-time and came to enjoy a beer at the local pub. He died in 1970, aged 70.