In our long and eventful history – remembering that Monte Luke Photography Studio will celebrate its centenary in 2020 – we have had our own special love affair with brides, thousands of them in fact.

Over the decades our photographers – including Monte himself – were regulars at Sydney’s grandest nuptials, particularly the up market Eastern Suburbs and North Shore society weddings that filled the social pages of the newspapers of the day. 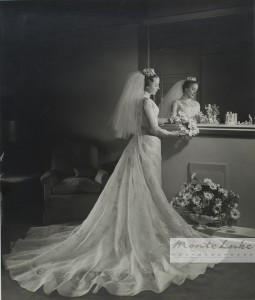 On a typical weekend before and after the Second World War, Monte and his team would cover seven or eight weddings on a Saturday. Initially these were shot in black and white, using cumbersome cameras, and in the very early days the lack of portability meant the photographs tended to be confined to formal sittings of the bride and bridal party.

All these years later, it is plain to see how striking some of these classic portraits are – true works of photographic art, beautifully lit and posed. Some of them survive in our vast archives and a couple are shown here, although we have next to no idea of who the subjects are. If you know, we’d love to have names put to them.

As cameras became more portable and film easier to use, our wedding photography took on a new informality – happy brides and their bridesmaids in beautiful outdoor settings, larger wedding parties with smiling mums and dads, and finally guests and their goings-on at receptions. But there remained a desire for classic portraits and these were often hand-coloured in the production process, a true art in itself. This meant perfect tones and textures for the perfect day, be it a bride’s skin or a summer sky. although there is an on-going listing of weddings and their negatives from 1969 until mid-1995 when Keith Friendship, by then owner and operator of the studio, retired the wedding photography side of the business.

There are at least three thousand of them contained in what’s known as the ‘doomsday ledger’ – a record book Keith discovered on taking over the studio in 1989. He’s unsure why it was given such a name, although he smiles at its implication as far as marriages are concerned. Still, the book also contains listings of thousands of christenings and corporate photographic jobs.