‘Our Glad’ – Gladys Moncrieff – enjoys a SAO biscuit and wins over the nation!

‘Our Glad’ as she was affectionately known, was a major musical star from the early 1920s through to the late 1950s. Meanwhile the Sao – made by the Arnott’s company – was almost a staple of the Australian diet. 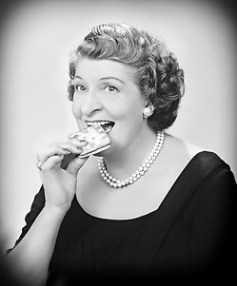 Gladys died aged 83 in 1976, while the Sao fell to the American food conglomerate Campbell’s which took control of Arnott’s in 1997.

Ms Moncrieff’s death was noted with great sorrow, especially by an older generation of Australians who remembered her as having been ‘true blue’ – the girl from country Queensland who had sung for the troops during World War Two and who later worked tirelessly as a charity fundraiser.

The Sao’s passing into American hands also received a mourning of sorts as Arnott’s – founded in a Newcastle bakery in 1865 – was seen as a cornerstone Australian company at a time when local icons were being snapped up by overseas interests.

This photograph – the exact date when it was taken remains unknown – is also of interest because it shows another side to Monte Luke’s work. It is presumed to be part of an advertising commission because ‘Our Glad’ was the kind of down-to-earth personality who would have been used to promote a wholesome product such as the Sao. Celebrity endorsement is nothing new and the stars of yesterday, be they from sport or entertainment, were in great demand.

Gladys was also highly entrepreneurial and for much of her early career she worked for J.C. Williamson, for whom Monte Luke also worked at one time. She later had contracts with the impresario Harry Wren plus the ABC and fellow radio broadcasters, the Macquarie network.

With her rich soprano voice and wide range that could handle everything from light opera to the popular songs of the day, Gladys enjoyed great success in Britain in the 1920s where one reviewer enthused,  “Before the night concluded, even the dullest critic must have realised that a new star of amazing brilliance had climbed above London’s theatrical horizon”.

Following a failed marriage and homesick for Australia, she returned in triumph to become a mainstay of stage, radio and recording until the late 1950s. She retired to the Gold Coast in 1968 and was something of a tourist attraction, making a habit of waving from her balcony to the boat loads of visitors who sailed by her canal frontage home, eager to get a glimpse of her.